Then, the outbreak reached the US, and the Queens marathon was canceled, along with other spring races including the Boston Marathon. Even the North Brooklyn Runners, his local running club, canceled all its group runs.

But just because Rahman doesn't have something to train for or a formal club to run with, he still has his legs, and so he'll still run.

"It's my only way to avoid going stir crazy as an extrovert, and taking a purposeful step away from the work I'm doing." the 25-year-old in Brooklyn, New York, who works for a primary care startup, told Insider.

Other runners around the country and world are taking to the streets and trails to keep up their fitness and immune systems as gyms close.

Experts say that, for the most part, the activity, along with walking, may be one of the only safe and healthy things people can do outside the home — even while social distancing and, in some cases, during a self-quarantine.

Here's why, and how to do it as safely as possible.

Spin studios, yoga classes, and CrossFit boxes — those that remain open, at least — are not recommended places to work out amidst a coronavirus outbreak since they require touching equipment, and often involve close quarters with other patrons.

"Gyms are in trouble, and specifically things like SoulCycle and enclosed-space-type activities," Dr. Erich G. Anderer, chief of neurosurgery at NYU Langone Hospital–Brooklyn and a founding member of the North Brooklyn Runners, told Insider. "You can do whatever you want to sterilize equipment, but the second someone coughs on something — boom, done." Running or walking outdoors, by contrast, can be a solo, touch-free activity.

While at-home workouts can keep up your fitness during a period of isolation, not everyone has that kind of space or accommodating roommates. Plus, they keep you inside, which has its downfalls for your physical and mental health.

"I don't need to quote a study to let you know that if you've been inside all day, a little time outdoors will improve your mood," Ballard said. "Vitamin D also plays a role in immune function, and sunlight is needed for our bodies to convert it to its active form."

One study, for instance, found that people who went for a daily brisk walk for 12 to 15 weeks reported half the sick days as their couch potato counterparts.

Even cycling outdoors alone may not be as good of an option as running since you might be more likely to injure yourself, and thus burden the healthcare system, which is why the Italian government has banned the activity altogether.

While the Danish government hasn't gone that far (yet), Ana De Mélo Ahlmann, a triathlete who lives in Denmark, is taking note and halting outdoor cycling for running and walking only. "I will do my part and stay in," she said. "I can run and walk in the park."

All of that is why — even if you don't already consider yourself a runner or prefer another type of exercise — the activity is worth giving a shot, Ballard said.

"This forced change of routine can be a huge opportunity to use your body in new ways," he said. "Staying active in a different way will allow your body rest and healing, decreasing your chances of overuse injury, while simultaneously strengthening areas previously neglected."

If you're in a low-risk group for contracting serious illness from the coronavirus and not experiencing symptoms, the advice for running or walking outside follows the same guidelines as other types of social distancing. Even communities that are requiring residents to "shelter in place" aren't keeping you from walking, running, or taking a pet outdoors.

"The general principle should be: Outside is better than inside, open is better than closed, fewer is better than more people, and stay away from sick people," Dr. Erich Anderer, a neurosurgeon and a founding member of the North Brooklyn Runners.

Ideally, you run alone on an empty trail or road, but that's not always practical, possible, or safe, so running with a friend or two while keeping the recommended six-foot distance is also OK.

That's what Sally Wood, a runner in Los Angeles, did over the weekend. She and a friend completed a favorite 16.5-mile route, and didn't even get close enough to each other to take a picture.

"Running is everything right now — it's a major stress reliever, it helps maintain my sanity, and any sense of normalcy," she told Insider. "Just getting outdoors and into the sun (or rain!) feels incredible. Even with social distancing."

Just make sure you take a measured approach to your exercise in order to hit that immune-boosting sweet spot, Ballard said.

"Use common sense and assess how your workout makes you feel after," he said. "Are you more energized or do you feel wiped out?  This is probably not the time to train for a personal best on a 10K." 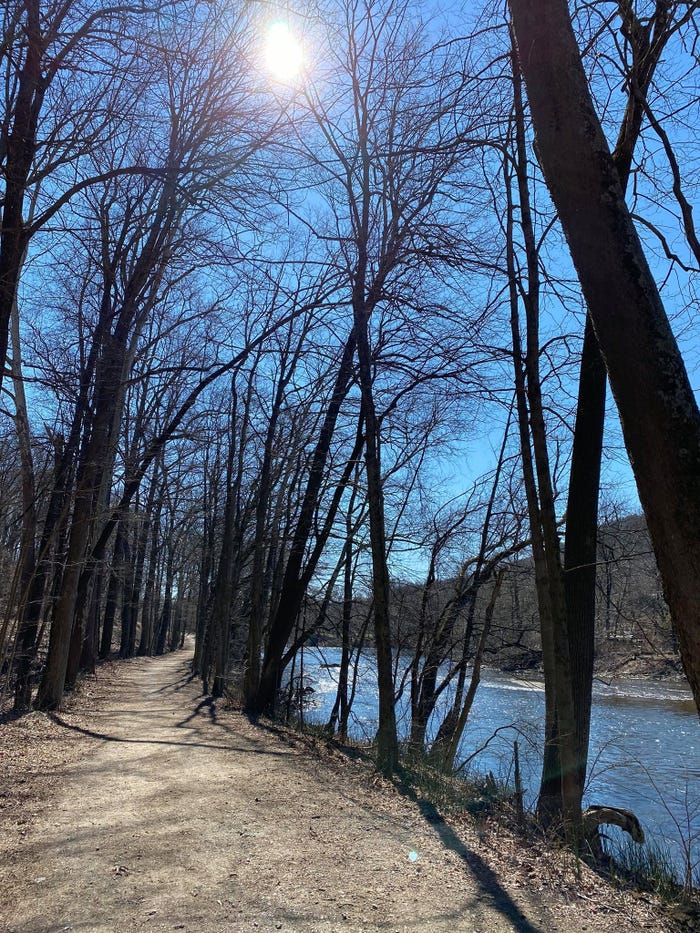 The view from one of Emily Carr's recent runs. She's run every day of her 14-day quarantine so far.
- Emily Carr

Even some people in quarantine can get out during off-hours

Dr. Emily Carr, a pediatrician and researcher in Connecticut, was exposed to the novel coronavirus while caring for the kids of a man who has the illness. While she hasn't experienced symptoms, she's been quarantined — and, with her public health department's blessing, run every day of the 14-day period so far.

"When the department of public health found out that I was a runner, they said, 'You can go for a run. We encourage you actually to go for a run ... at an off-time just by yourself. It's actually healthy. It's a great thing to do,'" Carr, who had been planning to run the Tokyo Marathon, told Insider. "So I embraced that."

She even started a "quarantine countdown," running the number of miles each day that corresponds with how many days she has left in quarantine, and using the opportunity to explore new parts of her broader backyards.

"Right now I'm not welcome anywhere else, but nature will always welcome me," she said. "It's pretty incredible."

Can't Get Your Vitamin D With The Sun?